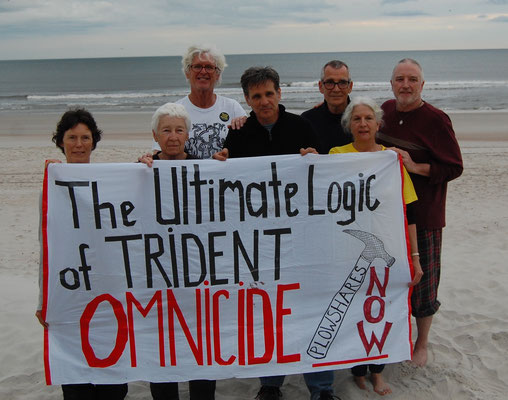 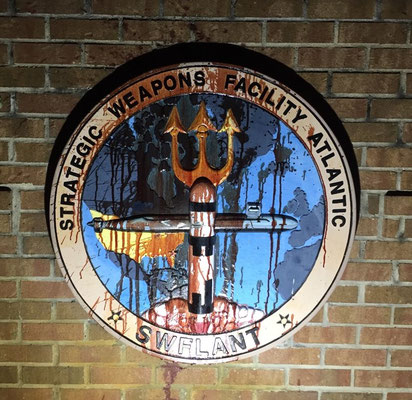 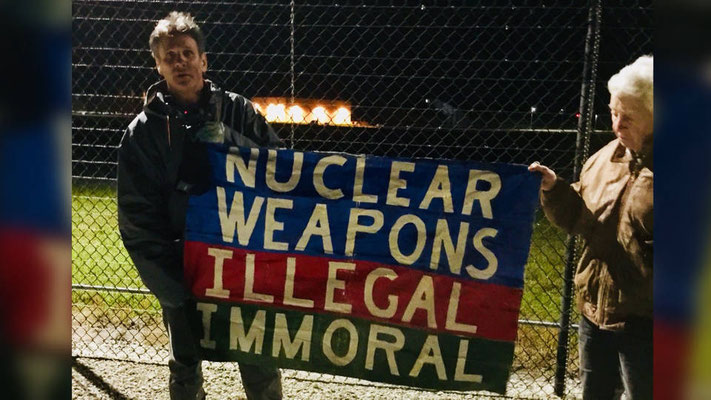 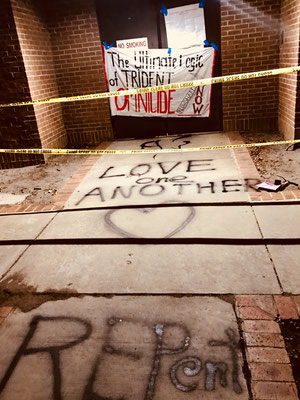 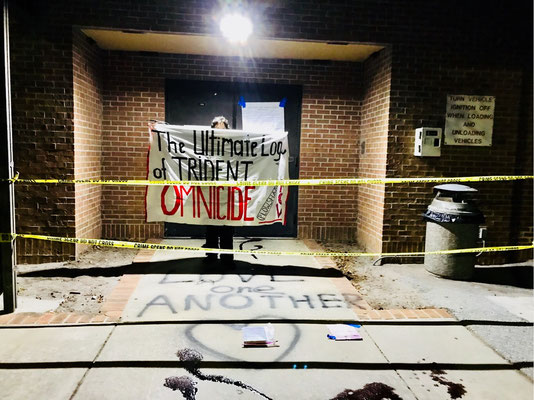 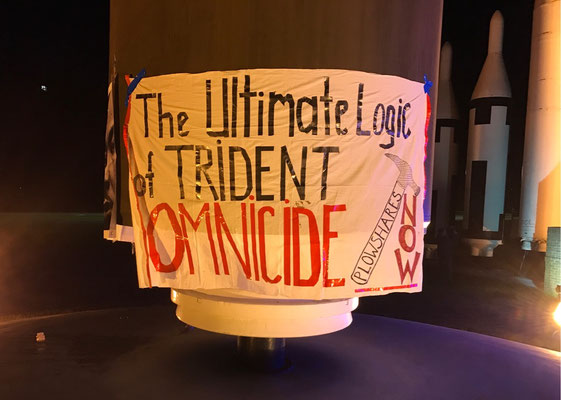 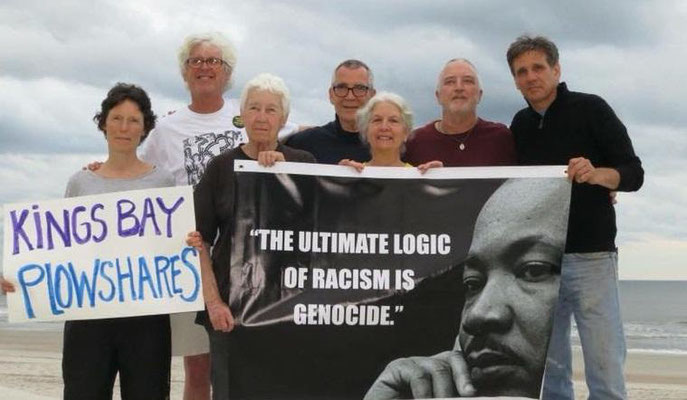 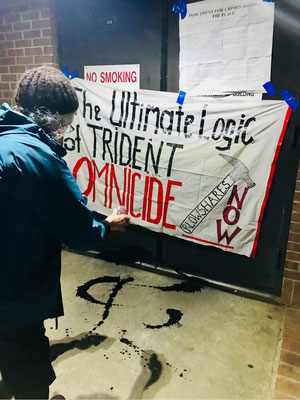 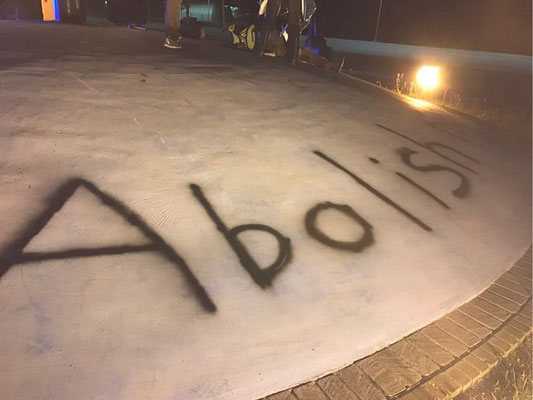 The seven chose to act on the 50th anniversary of the assassination of the Rev. Dr. Martin Luther King, Jr.,  who devoted his life to addressing the triplets of militarism, racism and materialism. In a statement they carried with them the group quoted King, who said: “The greatest purveyor of violence in the world (today) is my own government.”

Carrying hammers and baby bottles of their own blood, the seven attempted to convert weapons of mass destruction.

Kings Bay Naval base opened in 1979 as the Navy’s Atlantic Ocean Trident port.  It is the largest nuclear submarine base in the world.  There are six ballistic missile subs and two guided missile subs based at Kings Bay.

The activists went to three sites on the base: The administration building, the D5 Missile monument installation and the nuclear weapons storage bunkers.  The activists used crime scene tape, hammers and hung banners reading: “The ultimate logic of racism is genocide, Dr. Martin Luther King”, “The ultimate logic of Trident is omnicide” and “Nuclear
weapons: illegal – immoral.”  They also brought an indictment charging the U.S. government for crimes against peace.

All activists were detained and will be handed over to custody of the Camden County Sheriff on charges of trespass and defacing government property.  No one was injured.

This is the latest of 100 similar actions around the world beginning in
1980 in King of Prussia, Pennsylvania.

See their statement below, and their indictment (after the photos).
Links to media coverage are at the bottom of this page. You can find writings from the prisoners here. For more information, visit the Kings Bay Plowshares Facebook page.

UPDATE: The seven disarmament activists are being held at the Camden County Jail in Woodbine, Georgia. They are currently charged with three Georgia state crimes – misdemeanor criminal trespass and two felonies:
possession of tools for the commission of a crime and interference with government property.

APRIL 6 UPDATE, from the support team: At this morning’s bond hearing, we learned that our seven friends are being denied bond. This is bad news and we will explore an appeal. Based on what we saw, it seems that the judge sets excessive conditions of release for many defendants. Read more here.

SUPPORT THE PRISONERS
* Write them a note of support. Jail addresses can be found here.
Important, please note: “Inmates may only receive plain white postcards.
Postcards may not have any pictures nor backgrounds on them. Plain white postcards may be purchased at any Post Office.  All postcards are subject to search and /or screening. Postcards should have a return address in situations where the post card must be returned. Inmates cannot receive letters or e-mail.”
* Donate to the Kings Bay Plowshares Support Fund Donations are needed for legal research, travel for family and supporters, commissary, etc. costs… please help if you can!
Click here to make a donation.

Statement from the Kings Bay Plowshares

We come in peace on this sorrowful anniversary of the martyrdom of a great prophet, Reverend Dr. Martin Luther King, Jr.

Fifty years ago today, April 4, 1968, Dr. King was assassinated in Memphis, Tennessee as a reaction to his efforts to address “the giant triplets of racism, extreme materialism and militarism.”

We come to Kings Bay to answer the call of the prophet Isaiah (2:4) to “beat swords into plowshares” by disarming the world’s deadliest nuclear weapon, the Trident submarine.

We repent of the sin of white supremacy that oppresses and takes the lives of people of color here in the United States and throughout the world. We resist militarism that has employed deadly violence to enforce global domination. We believe reparations are required for stolen land, labor and lives.

Dr. King said, “The greatest purveyor of violence in the world (today) is my own government.” This remains true in the midst of our endless war on terror. The United States has embraced a permanent war economy.

“Peace through strength” is a dangerous lie in a world that includes weapons of mass destruction on hair-trigger alert. The weapons from one Trident have the capacity to end life as we know it on planet Earth.

Nuclear weapons kill every day through our mining, production, testing, storage, and dumping, primarily on Indigenous Native land. This weapons system is a cocked gun being held to the head of the planet.

As white Catholics, we take responsibility to atone for the horrific crimes stemming from our complicity with “the triplets.” Only then can we begin to restore right relationships. We seek to bring about a world free of nuclear weapons, racism and economic exploitation.

We plead to our Church to withdraw its complicity in violence and war.
We cannot simultaneously pray and hope for peace while we bless weapons and condone war making.

Pope Francis says abolition of weapons of mass destruction is the only way to save God’s creation from destruction.

Clarifying the teachings of our Church, Pope Francis said, “The threat of their use as well as their very possession is to be firmly condemned … weapons of mass destruction, especially nuclear weapons, create nothing but a false sense of security. They cannot constitute the basis for peaceful coexistence between members of the human family, which must rather be inspired by an ethics of solidarity.”

Nuclear weapons eviscerate the rule of law, enforce white supremacy, perpetuate endless war and environmental destruction and ensure impunity for all manner of crimes against humanity. Dr. King said, “The ultimate logic of racism is genocide.” We say, “The ultimate logic of Trident is omnicide.” A just and peaceful world is possible when we join prayers with action. Swords into Plowshares!

April 8 -  "How Do You Tell the Kids that Grandma Is in Jail for Resisting Nuclear Weapons?" by Frida Berrigan, Truth Out ... read more

The perpetrators are members of the Plowshares Movement, a Christian Pacifist group that has staged similar prot...